UPS: How to choose yours
Uninterruptible Power Supplies (UPS)
13 September, 2019 by

What they’re intended to do and how to choose yours

The simplest way to think of a UPS is a battery pack combined with a power bar for your computer. They provide electricity when there’s a blackout and may also give protection from events such as brownouts or power surges. But how do you pick one? UPS’s have ratings like Volt-Amps (VA), Watts (W) and Amp-Hours (Ah) along with the manufacturer’s claimed “typical run times”. The meaning and application of these terms aren’t entirely straightforward and beyond them you still have to consider the form-factor and the class of UPS (Standby, Line-Interactive, Online) which comes with their own set of specifications like Transfer Time. Here’s a distilled overview of UPS’s and a quick list of steps to decide on a one. 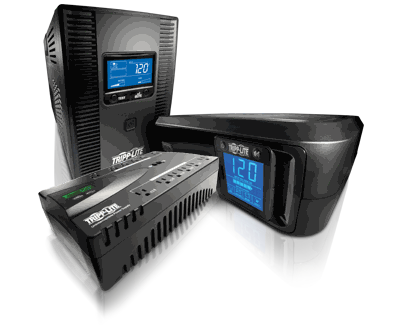 Purpose of the UPS

Here’s what your UPS is NOT intended to do: run for extended periods on battery power.  The battery backup portion of your UPS is meant to provide enough time for you to save your work and safely shut down your system.  That is to say, the ones with reasonable prices are like that; fabulously expensive systems (but well worth it for projects that need that kind of hardware) capable of holding power for hours do exist!  In any case, you should be aiming for 10-20 minutes of runtime which should be more than sufficient to save your work and then shut down.

The other purpose of your UPS is power conditioning.  The range of capabilities in this regard widely varies depending on the type of UPS.  A Standby UPS will backup from blackouts/brownouts and cut off spikes (if it has a circuit breaker) while an Online UPS will fully isolate your equipment’s electricity supply, preventing even minute power fluctuations from getting through.

The happy medium, the Line-Interactive UPS (sometimes called AVR), will provide protection against power spikes, outages, sags and surges along with a medium measure of power filtering.  This is usually more than sufficient for computer equipment (although high fidelity sound systems may require better power conditioning than that).  Because of cost, most of the time you’ll either have a stand-by or line-interactive UPS.

There are two ratings that must never be exceeded.  Volt-Amps (VA) and Power (W).  Failure to stay within these limits will basically make your UPS not work.  This might be subtle; your system could appear to work when tested upon installation, but six months down the road, when the UPS is called upon in a real power outage, it could very well give no protection at all.  It is well-advised to leave leeway instead of running right up to the limits of your UPS (I’d recommend aiming for half of the power rating).

Most of the time, the value you’ll see associated with a new UPS is the VA rating.  This is related to the W rating and in fact, the W rating is assumed to be 60% of the VA rating if it’s not listed in the specifications.  You must not exceed either the W or VA rating of the UPS.  If only one is exceeded, then it doesn’t matter how far below the other rating you are.

Unfortunately, it’s difficult to estimate what your system will actually use.  Figuring out the maximum VA it can ever draw is simple enough (just multiple the current rating with the voltage) but this really just tells you the maximum capacity of the power supply and not much about what the computer uses.  Even if you measure it with a tool, your computer uses different amounts depending on the work it’s doing so the measurement might be not be accurate.  Still, it’s not too difficult to be conservative to make sure your UPS is up to snuff.  Of course, in the end, you must test to make sure your UPS doesn’t immediately shut down when the power goes out.

One more thing to keep in mind is that the power rating of your computer’s Power Supply Unit (PSU) isn’t directly related to what your computer uses.  Even if you have a 1000W PSU in your computer, you may very well only use 300W under load and thus a 1000VA/600W UPS is ideal.

The power coming from your electric company is a Sine Wave (ideally anyway since you may have dirty power that deviates from the pure wave) and this is the wave-shape that is preferred by electronic equipment.  However, the circuity to output a true sine wave for a UPS is more expensive and you will only see this capability in a higher end UPS.  This is compatible with everything but not everything needs it.

The cheapest and worst wave-shape would be a Pure Square Wave.  These can introduce buzzing in audio equipment (due to harmonics) and can sometimes even have insufficient voltage for proper functionality.  Fortunately, few UPS’s will output this nowadays so avoid any UPS that only outputs a square wave.

Instead, you’ll see a Modified Square Wave from most low to mid-ranged UPS’s.  They’ll have names like “Stepped approximation to a sine wave” or “Simulated sine wave”.  Overall these work well with most systems since they reach much closer to the voltage peak but they have a miniscule power gap between peaks that can sometimes cause problems with Active PFC power supplies.

Finally there are some less common wave types (and they generally have misleading names such as “Adaptive Sinewave”), like the Triangle Wave, which will perform better than the modified square wave but not quite as well as a true sine wave.  It’s worth going for these since they’re usually not much more than simulated sine wave systems but keep in mind that it’s still not a real sine wave.

The (very) general recommendation is to pick a line-interactive, simulated sine wave UPS with a power rating (W) of twice your system’s load power draw (W). 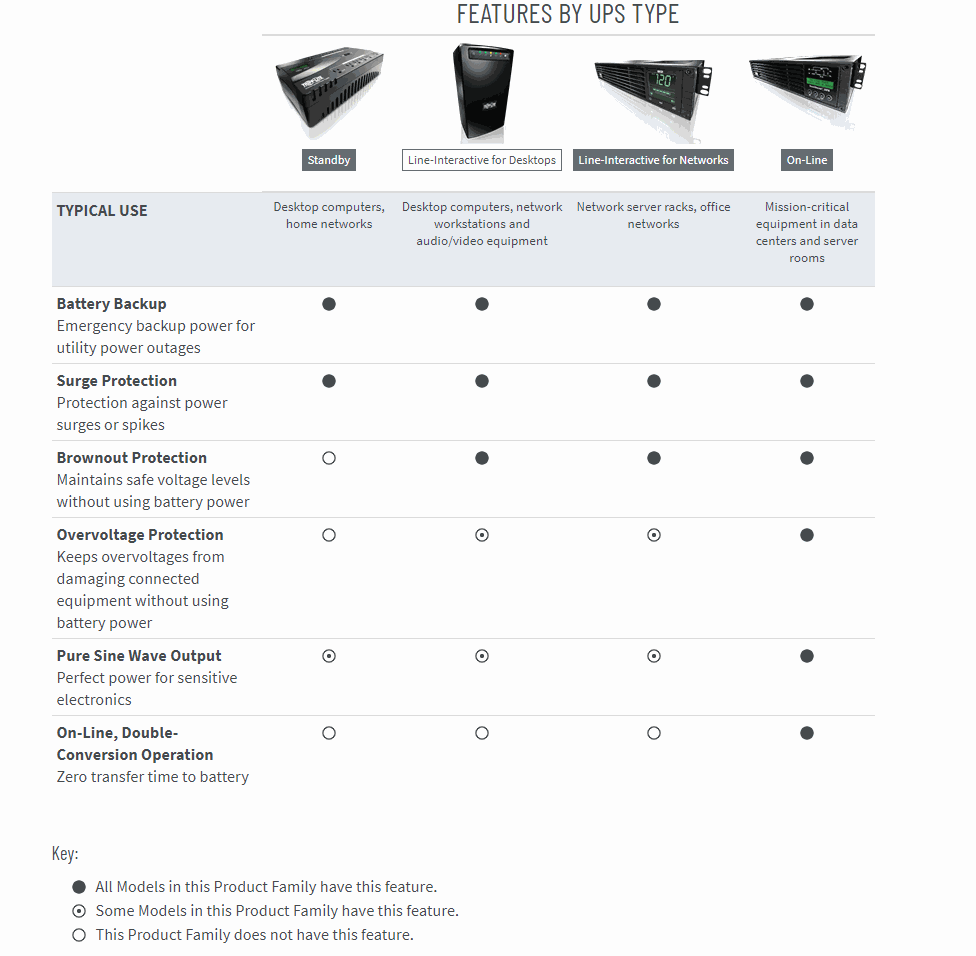 Now that you have a UPS which can handle the load from your computer, it would be good to avoid common pitfalls that can reduce or inhibit entirely the protection your UPS provides.

For that matter, anything that drains a lot of power should never go on the battery side.  This includes space heaters, photocopiers, hair driers, appliances, etc.

Even if the devices you use are reasonable, fight the temptation to plug in everything into the battery side.  Plug in only what is absolutely necessary (i.e., the computer, the screen and the switch if there’s one).

You don’t have to test every week but it would be worth checking up on the UPS every other month or three to make sure nothing has gone wrong in the meantime.  Someone may have plugged in a space heater unbeknownst to you and drained the battery sufficiently that it no longer hold much of a charge.

Even if you’re lucky, the battery in your UPS will need to be replace at around 3 years. If your battery gets triggered often, whether because of brownouts or blackouts, the battery life-expectancy will plummet (down to almost no battery time after a year in some cases!).  Some UPS software packages will warn when to replace the battery but regular testing is the best way to be sure.

Extended runtime (or the lack thereof)

The VA rating measures how long the battery lasts

If the load is doubled, runtime is halved

What VA do I need?

Do I need to worry about transfer time?