A/V Convertors and connectors:
The basics
13 September, 2019 by

Modern High Definition Televisions have fortunately settled down on a single cable to rule them all: High Definition Multimedia Interface (HDMI).  Unfortunately, HDMI ports are not found in everything especially older displays.  If Digital Visual Interface (DVI) is being used, then the conversion is simple since HDMI is electrically similar to DVI.  It’s a little trickier for the other cases.

Part of the reason why it’s so simple to go from DVI to HDMI and vice versa is because they’re both purely digital formats.  Information is transmitted as coded packets that also include error checking and data correction.  All new audio visual systems work in this manner which is why HDMI is the native format for modern systems.

However, the previous generation of consumer audio visual was reliant on analog formats.  These include (in order of increasing quality) composite, s-video, component and VGA connectors.  Converting to a digital format like HDMI isn’t a simple task while converting from HDMI to analog is deliberately made difficult (more on this later).

Generally speaking, even just converting between these analog formats is not a trivial task.  Composite and s-video are close enough that passive adapters can do the job but for VGA and component, the output source must be designed to accommodate the other format.  For instance, a VGA to component cable will not work properly unless the VGA output device has the function to switch into component mode.

There are only a few cases where a simple adapter is enough to change one connector to another.  For the remaining cases, the use of active converters which process and change one format to another is needed.  Active converters are one-way devices, so you should always be clear in what you need to convert from and to.  They will also often need an external power source so be sure to include that when planning a setup.

Some Use Case Scenarios

This is a confusing case where attention must be paid to the details.  There does exist an adapter for DVI-I which has the cross-hatched pattern.  If your video card has such a connector, then the simple adapter, VA-393A, can easily change the signal to VGA.  This is because DVD-I connectors already carry the full analog VGA signal in the cross-hatched area (the grid area carries the digital signal) allowing the adapter to simply pull out the signal.

S-Video to VGA Converter, which supports 4:3, 16:9 and 16:10 wide screen with output VGA resolution up to WSXGA 1680x1050! Suitable for connection of DVD, STB, DVR, etc. to PC monitor. With 3 decoding function, the picture after conversion output from VGA is with high definition and effect. 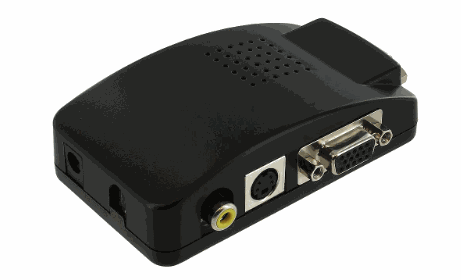 HDMI to DVI & DVI to HDMI

This requires only a simple adapter to make the conversion.  Keep in mind that DVI doesn’t normally handle HDCP nor does it carry audio like HDMI can.  If your application requires those factors, considerations must be made.  For the more common concern of audio, one solution would be to carry it separately.

Despite all the possible connectors that you may encounter when dealing with audio and video, solutions do exist to help you deal with them.  Lin Haw carries a multitude of convertors and adapters which will help you deal with whatever situation you may face.

HDMI includes a copy protection method known as HDCP.  This is designed to make it difficult to make copies of a video feed along the entire path between a video source (like a Blu-ray player) and the output source (like a HDTV).

In terms of HDCP, a convertor from HDMI would be considered an output source which means it would need to be HDCP compatible in order to work with encrypted video.  Since a majority of media in high definition is encrypted, it is vital that any HDMI converter, splitter, extender or switch be HDCP compatible.

Sign in to leave a comment
Read Next
UPS: How to choose yours
Uninterruptible Power Supplies (UPS)