In our modern interconnected age, more and more devices are networked together.  It’s also a given that they’ll require power.  This has led to the hassles of pulling both power and data cabling.  It may even simply be infeasible to wire up an electric outlet in proximity.  Fortunately, this problem is elegantly solved with PoE technology.

Simply put, PoE transmits power over the same Ethernet cable carrying data to a device.  The origin of this technology is utilizing the unused twisted pairs for 10/100mbit/s Ethernet since only half of the twisted pairs are used for carrying data.  However, PoE is also capable of Gigabit Ethernet, which uses all the wires, by using a phantom power technique meaning PoE is capable of meeting the device data throughput requirements of today and the future.

The devices that can use PoE range from IP phones to wireless access points to IP cameras.  If your device needs Ethernet for its operation, PoE is almost certainly available to make it easy to power up the device.  With PoE, there is no need to pull any cabling besides the ubiquitous Category 5 cabling nor is there any need to get additional electrical wiring done, with all the hassles involved, to every remote location. 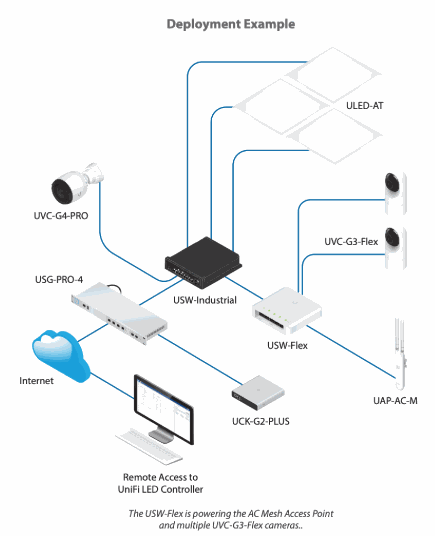 Unlike earlier and proprietary techniques for carrying power using Cat.5 cabling, PoE is an internationally ratified standard (IEEE 802.3af) that has undergone a recent revision (IEEE 802.3at).  The original specification allows for about 15W continuous power while calling for a minimum 13W to be available.  The updated IEEE 802.3at standard allows for twice the available power to be carried increasing the types of devices that could use PoE.  While the nominal voltage used is 48V, PoE splitters will output the lower voltages non-PoE devices usually take as inputs.  With the new IEEE 802.3at standard, the high power devices even run at 56V!  These will work together with the older devices but the full power is only available with matched devices and voltages.

It should be noted that Power Over Ethernet is the polar opposite to Powerline Ethernet technology.  The latter is a method to utilize existing wall sockets and power lines to carry data.  It is suitable for home or very small offices with low throughput requirements to be networked together.  Furthermore, Powerline Ethernet is meant to take advantage of existing electrical wiring since having an electrician set up new power sockets and wiring is more expensive than simply pulling category 5 cables.

In the end, the PoE standard provides for almost any scenario keeping them simple and safe across differing vendors.  For instance, adding PoE can be as simple as a drop-in replacement with a PoE capable switch or adding a PoE injector hub to the rack.  All these advantages make PoE something to be seriously considered in any scenario.

Sign in to leave a comment
Read Next
Western Digital Hard Disks:
What do all the colors mean?